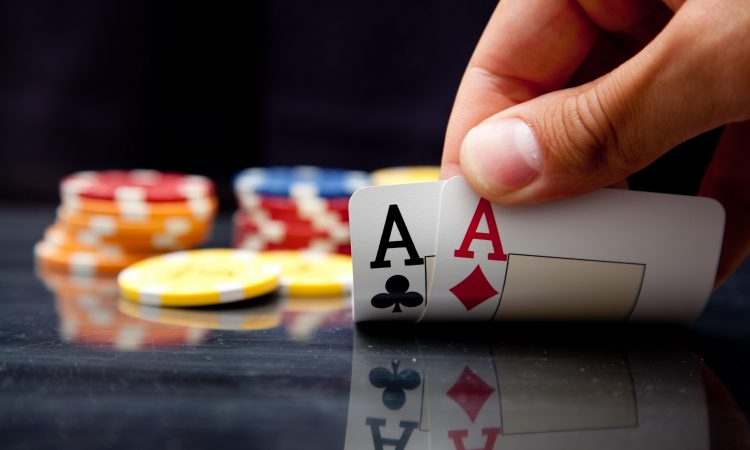 Texas hold ‘em is a variation of stud poker, believed to have originated in Robston, Texas, in the early 1900s.

It was the variation used in the original World Series of Poker at Binions Horseshoe Casino, Las Vegas, in 1970 and has since become established as the standard variation used for most major international poker tournaments. Doyle Brunson, winner of the World Series in 1976 and 1977 and an undisputed giant of the modern game, famously described Texas hold ‘em as the Cadillac of poker in Super System – A Course in Power Poker, his definitive book of poker strategy first published in the late seventies and never out of print since.

Although the World Series, the officially recognised world championships of the game, had often been featured on American sport channels, it wasn’t until the first series of Late Night Poker aired on Channel Four in Britain in 1998 that poker became a genuine television spectacle. Late Night Pokerintroduced cameras under a glass-rimmed table, allowing the audience to see the players’ concealed cards. Clever editing then allowed the television audience either to be kept in suspense or to have more information than the players themselves on whether to call bluffs or fold hands. Television companies worldwide have since expanded upon this format, introducing further gimmicks such as heart-monitors attached to players, and poker is now established as a televised event. A satellite channel dedicated entirely to poker was launched in Britain in March 2005.

Internet poker first surfaced at the end of the 1990s but received an unprecedented boost in 2003 when Chris Moneymaker, an accountant from Tennessee, won the World Series having earned his $10,000 seat via a $40 online tournament. Countless online poker sites offer a huge variety of games 24-hours a day to players across the globe.

In the course of one complete hand of Texas hold ‘em, players will have the opportunity to see a total of seven cards from which to make the best five-card poker hand (see the Rankings section below). Two of these cards are the player’s private hole cards, while the remaining five are community cards, dealt face up in the centre of the table. This means that at the end of a complete round at least three cards of every player’s hand are visible to all participants. The hole cards are therefore crucial, but it is also common that a round of poker ends before all the community cards have been exposed.

Before a single card is dealt, two players are required to place a compulsory blind bet in the centre of the table, ensuring that there is money to be contested in every pot. The players then receive their hole cards, face down, and make an initial betting decision solely based on the potential of these two cards. Play moves around the table in a clockwise direction, with the player to the left of the dealer speaking first. (The nominal dealer is indicated by a marker on the table that moves round one seat at a time after every completed hand.)

Players can fold (discard their cards and take no further part in the hand), call (match any bet already staked by another player) or raise (increase the size of any bet already placed by another player). A further option to check is available to players when no money has yet been wagered and they do not want to invest any money at that point. Checking moves the action to the next player, but is not permitted if someone has already bet.

A round of betting ends when parity has been reached by all players wishing to remain in the hand. They must each have either matched the bets of their competitors or folded their cards.

A flop is then dealt: the first three community cards are placed face up in the centre of the table. A second round of betting then occurs, with players receiving the same options as before. They can either bet (raise), fold, call or check, depending on what any player prior to them has already done.

When parity has once again been reached, the remaining players will see a fourth community card, known as the turn. A betting round takes place once more and the fifth or river card is dealt. The final betting round is then contested and if two or more players still remain they showdown, that is reveal their cards and the player with the best hand takes the pot.

It is relatively rare to reach a showdown. Players often fold their cards in the face of heavy betting from their opponents in earlier stages.

In no-limit poker, any player can stake any or all of their chips at any time.

Tournament players pay an entry fee, known as a buy-in, and are then given an allotment of chips, in various denominations. All betting is done with the use of these chips and no cash ever appears on the table.

In a freezeout tournament, a player is eliminated when they have lost all their chips; there is no buying back into the action, nor is there the possibility of losing any more than the original buy-in. (Wagering cars, houses, wives, et cetera belongs strictly in Eastenders and such like.) Similarly, players cannot cash-out and leave the tournament whenever they wish. All entry fees go into the tournament prize pool and though the action continues until one player has all the chips, a top percentage of players will make the money.

There are usually between eight and ten players on a single table in a major tournament, with any number of tables consituting the entire field. As players lose their chips and are eliminated from the tournament, the card-room manager will reduce the total number of tables in play by moving players into vacant seats at other tables.

The blind bets are gradually increased at predetermined intervals, making each round of action incrementally more expensive as the tournament progresses.

HIGH CARD – If no player has any of the hands below, the highest card wins

TWO PAIRS – Self explanatory: two sets of one pair among the five card hand. Again, if two players have the same two pairs, then the additional kicker decides who wins.

THREE OF A KIND – Three cards of the same rank.

FULL HOUSE – Three of a kind and a pair in one five-card hand.

FOUR OF A KIND – All four cards in the deck of the same rank.

STRAIGHT FLUSH – Five cards of the same suit AND in sequence. The highest straight flush is the Holy Grail of poker: the Royal Flush, which is 10-Jack-Queen-King-Ace of the same suit (and not seen nearly as frequently as the movies would have us believe).

Bad beat – the bane of every poker player’s life: a fortuitous series of cards that turns what was originally the worst hand into a winner

Blinds – compulsory bets placed by two players before every hand begins. The blinds ensure some money in every pot

Bluffing – deliberately misrepresenting the strength of your hand to induce a mistake from an opponent. Examples include placing a large bet with poor cards in the hope an opponent folds, or betting low amounts with a strong hand to get another player to raise

EPT – the European Poker Tour, a series of seven high buy-in, televised tournaments in venues across Europe, modelled on the World Poker Tour (WPT) events in the United States

Fish – poker slang for a weak player; bait for the “sharks”

Flop – the first three community cards, dealt face up after the first betting round

Loose (as in playing loose) – playing a lot of pots, with or without good cards; gambling with marginal hands

Poker face – a non-committal facial expression, traditionally one of focused indifference, designed to give opponents no information on the strength of a hand

Pot – the total money staked by all the players on an individual hand. In the event of a “showdown” the best hand wins the pot, otherwise the player who has made an uncalled bet wins it

Prize pool – the total amount of prize money on offer. The player finishing first receives the biggest prize but a predetermined number of additional players will also make a profit

Rail – specifically, a barrier around a poker table behind which the spectators stand; metaphorically, the place an eliminated player is sent to when they leave the tournament

Raise – increasing the current bet on an individual hand

River – the fifth community card, dealt face up after the turn

Satellite – a small buy-in tournament, often (but not exclusively) played online, where the prize for the winning players is a place in a larger buy-in event

Showdown – the end of a hand when all the community cards have been dealt and parity has been reached in the final betting round. Players expose their hole cards and the best hand wins the pot

Tell – an involuntary quirk of an individual player that offers information about the strength of their hand, whether they are bluffing, and so on

Tight (as in playing tight) – refusing to gamble without good cards; not bluffing and folding often

Turn – the fourth community card, dealt face up after the flop

World Series of Poker (WSOP) – the official poker world championship held annually since 1970 at Binions Horseshoe Casino in Las Vegas. Originally contested by just six high-stakes gamblers, each wagering $10,000, the World Series now comprises 33 events over five weeks. The $10,000 buy-in remains the same but in 2004 there were a record 2,576 players in the main event (the “big one”) contesting a prize pool of more than $24 million. The first prize, won by Greg Raymer, was $5 million.